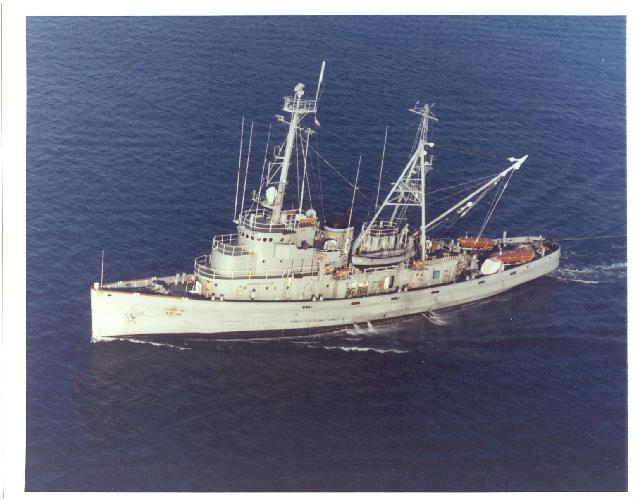 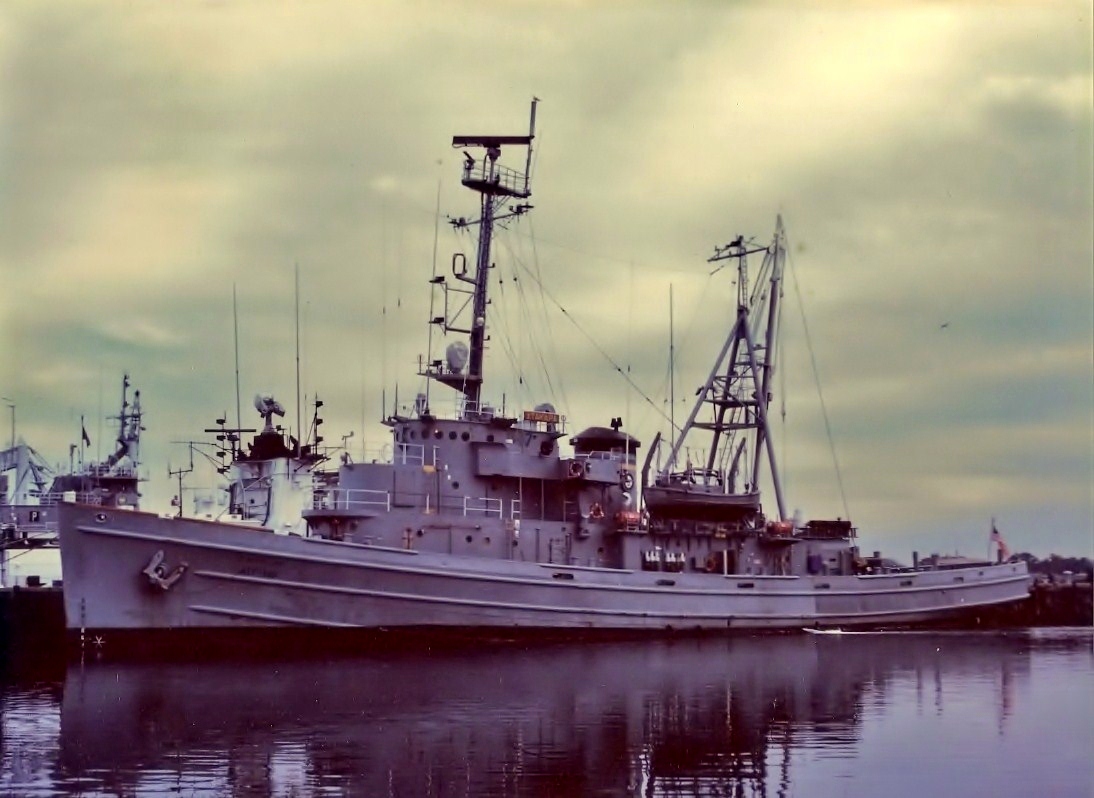 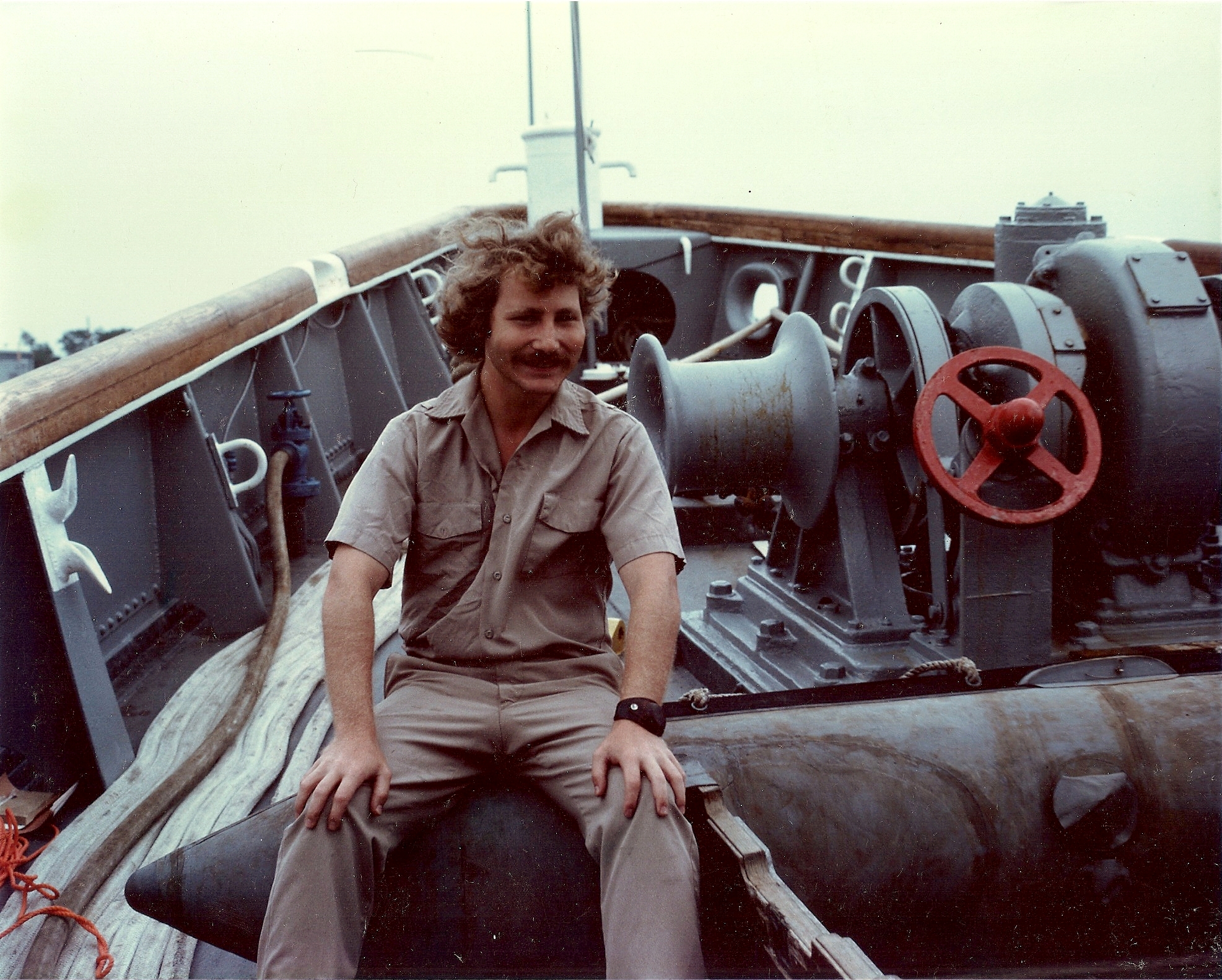 One is a photo that I took of the USNS Atakapa at Little Creek when I was on her in 1979, probably about a year before she was finally retired. The other is a photo of myself on the fordeck of the Atakapa during that time, when I was the Second Mate of her. That's the anchor windlass behind me, and the fire hose hooked up to the blue hydrant is the connection to the shoreside fresh water supply. The mooring line on the deck is "faked out", Merchant Marine-fashion, rather "flemished down" Navy-Style because, while less ornate, it was easier to do, easier to secure for sea and instantly ready to run out at any time. The object I was sitting on was our infaltable "Z-Boat", which we used at sea lieu of the motor whaleboat, because it was much easier for a small crew to launch and recover. As you can see, we didn't go in much for uniforms. The sort of crews we got weren't the sort of men likely to be impressed by gold braid and fruit salad. Besides, the entire ships's company was so small that everybody knew who everybody else was, anyway.

I was Second Mate on the USNS Atakapa from 6/28/79 until 1/3/1980. The Atakapa is officially listed as having been decommissioned in 1974, but I believe she was actually still running until 1981. The ship was still in excellent condition when I was on her, and was in constant demand by the Navy. In fact, she won the "Top Ship" award for the best run ship in MSCLANT. However, when the brand new USNS Powhattan, the first of the new class of Navy tugs, showed up at Little Creek shortly before I got off the Atakapa, we all realized the end was near for all the old WW-II tugs. It was a simple matter of economics. The Atakapa needed a crew of 26 while the Powhattan only required a crew of 16. MSC made a few alterations to the Atakapa after they took her over from the Navy(see attached). They replaced the 3-inch gun with an air conditioning system, which was probably a whole lot more useful. The Atakapa rolled so much that I doubt if anybody would have been able to hit anything with that gun in anything other than in a flat calm.

Since we only had a quarter the crew the Navy needed, MSC also took the opportunity to refit the interior spaces to a more habitable condition. I had a stateroom to myself, which shared a head and shower with the adjoining Chief Mate's stateroom. I once had occasion to go aboard the USS Shakori, so I got to see just how crowded the Navy ATFs actually were with four times as many men packed into the same size ship. Compared to the Atakapa she was cramped and squalid, and I couldn't help feeling sorry for those poor guys. Fortunately for them, the Shakori almost never left the dock. On the business end, MSC also fitted a new experimental constant tension towing winch, which worked in conjunction with a special 10-inch diameter nylon towing hawser. We used it for offshore towing jobs, and I guess it worked pretty well. At least, we never experienced any problems with it that I can recall.

I don't know about the other crew members, but I had never been on a tug before I joined the Atakapa, nor had I ever undergone any specialized towing training. My previous berth had been as Second Mate on an old World War II Victory cargo ship, which was a great learning experience but had absolutely nothing to do with towing. It was all learn-on-the-job, and since the Atakapa worked pretty constantly, I had to learn pretty fast. The Atakapa happened to have an outstanding crew at that time, though, which always helps.