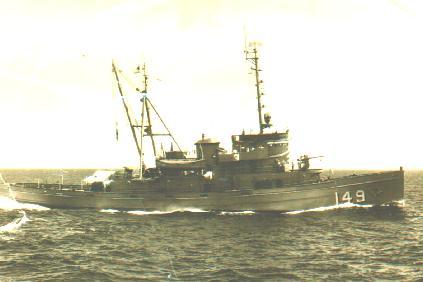 I was a radioman on the Atakapa from 1969 through 1970. While I was on board we made one extended deployment to the North Atlantic with a fistful of CT's underfoot. The ship had made one or two pior to that in the same mode under the command of LCDR John Culliper. My ride to the North Atlantic was the last one for her in that "mode". Upon our return to CONUS in the fall of 1969 we reverted to conventional fleet tug duties including towing and providing services for ORI/REFTRA at Gitmo.

This past weekend (9/30/2000) I was fortunate enough to be invited on a dependent's cruise on the USS Harry S Truman (CV-75). We were at the home of my fiance's son, who fly's F-18's off the Truman. Tommy saw my reproduction ATF-149 ball cap, did a bit of a double take and asked me the name of the ship. I told him and his face flushed a bit. He went on to tell me that the Truman had used Atakapa as a target off Puerto Rico in July of this year and that he personally had fired a Sidewinder into her. He showed me where on the ships outline but said he had hit her portside not starboard. I thanked him for the info and told him that he had hit her right where I used to work...the radio room. I was amazed by the coincidence.

The next day the the rest of the pilots in the VF 105 Ready Room got a kick out of the story. Later in the day I was introduced to the skipper of VF 105. who was was also taken by the story. I told him that I had been on two Navy ships in my life and the second one had sunk the first one. To her credit though, Lt(JG) Tom Heck told me that it took a hell of a lot of ordnance to sink her a good deal more than they had expected. I had been trying to locate her for sometime, now I know where she is: 020:40:80 North and 064:05:00 West in 2700 fathoms.
Rest well my lady.


Crew members of the USS Atakapa share the loss of Jim Brodhead who passed away 17 December 2012
He was a valued crew member 1969-70 and will be missed not only by his family but by all his shipmates.